Load Cells and How They Work 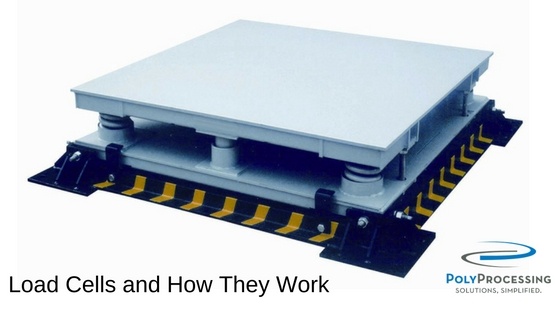 At Poly Processing Company, we have a number of customers who have asked about the use of load cells. Load cells are used to weigh chemical storage tanks through an independent measuring system—no level measurement devices are placed in the tank itself. This allows one scale to be used to weigh a variety of tanks or chemicals without requiring anything to be installed on the tank itself.

There are a number of different types of load cells, each of which has its own specific uses, but all of them are a type of transducer. A transducer is a device that can convert one type of energy into another type. In the case of a load cell, it transforms the force acting on the cell into one of three different types of electronic signals by changing its voltage, its current, or its frequency. The type of change that occurs depends on the circuitry used and the load cell.

A capacitive load cell, on the other hand, is characterized by changes in capacitance. Capacitance is the load cell’s ability to hold a specific amount of charge after voltage has been applied to the cell.

How Load Cells Are Used to Weigh Tanks

Load cells are often used to weigh chemical storage tanks because they are non-contacting and non-intrusive yet still provide a very reliable method of weight measurement. As with a truck weigh station, If inventory on a truck is measured by weight instead of by piece, it’s much easier to quickly tell if the inventory has changed and what the total weight is. Using a load cell system eliminates a number of issues that are often found with other, more traditional level monitoring devices. Those devices must be mounted on top of the tank or placed within it. This can be very difficult if the surface is uneven or when the tank expands or contracts due to heat or product change. Load cells can be used in either of those conditions and often times can be designed to conform to IBC guidelines.

When used to weigh chemical storage tanks, a load cells are normally connected to a platform built for the tank to sit on. When the tank is placed on this platform or framework, the load changes the cell’s resistance. Generally, load cells are used with day tanks and, in some cases, bulk storage tanks.

When the tank is ready to be weighed, it is placed on a tank scale. The scale is normally installed on a concrete pad. The basic idea is that tank is weighed empty and then the scale is zeroed out. Then the chemicals are added and the load cells measure the stress changes. The stress changes can then be converted to measurements such as gallons-per-inch, weight-per-inch, gallons, etc.

Most load cells are actually engineered as part of the tank system installation design. This is done by an onsite engineer or someone with load cell installation experience. This non-intrusive method of weighing a tank means that as long as the tank doesn’t leak or is not overfilled, there’s no chemical impact on the load cells.

At Poly Processing, we have customers who prefer to use load cells because of their accuracy. We have a partnership with a number of companies who offer load cells and work with third parties who handle the installation.

If you’re interested in load cells, give us a call today to discuss how they can impact your tank system.