What's the Best Tank Mixing System for Your Chemical Tank?

Many industrial chemical applications use mixers to create products, keep chemicals in suspension, for wastewater treatment purposes, or to dilute the chemical. Polyethylene tanks are well-equipped to handle that type of process, as most chemicals can be safely combined. In this article, we’ll discuss three basic types of mixing systems that our tanks use. 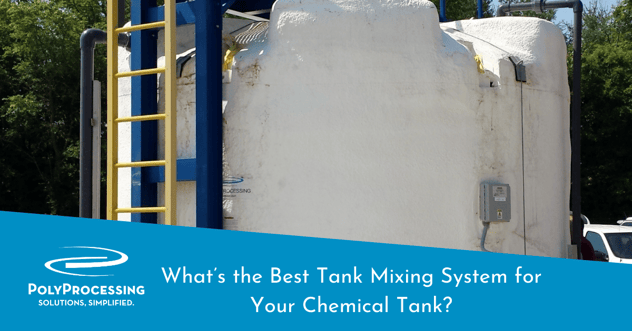 Properly designed mixer systems should be simple to operate. Let’s explore the components and considerations of a safe, cost-effective chemical mixing system for polyethylene tanks. 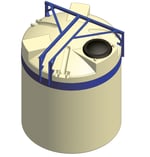 Poly Processing Company can install baffles into the tank wall, if required.

Several loads and strains must be considered when identifying the best type of mechanical mixer for your polyethylene tank. It’s critical to determine the downward load, bending load, weight of the mixer, torque load, horsepower, and correct angles to ensure the proper bracketing is designed into the tank mixing system.

If the mixer isn’t properly mounted and bracketed, improper mixing can result in additional costs of wasted materials, and potential damage to the mixer or even the tank. The mixer agitator must be supported by a bracketing system or attachment that is compatible with your particular storage tank.

The mechanical mixing system is efficient and reliable when installed properly, but there are some disadvantages to using it, including:

If you want to avoid these issues, large bubble mixing may be a more attractive option for you.

Large bubble mixing uses sequentially injected bursts or pulses of compressed air or gas. These pulses are released through a set of disks called accumulator plates, which are secured to the tank bottom. By strategically locating the accumulator plates on the tank floor, your chemical tank’s contents can be uniformly mixed.

The mixing process relies on releasing the air at timed intervals. The sudden release jolts the liquid molecules into motion. The air is released laterally in a 360-degree direction beneath the open accumulator plate. The air then accumulates over the plate in a large bubble. A vacuum is created, which pulls bottom liquids up to the surface. As the bubble rises to the surface, it pushes the liquid above it up and out toward the tank perimeter. This continued sequence effectively and efficiently mixes all of the liquid chemicals in your tank.

With no moving parts and minimal maintenance, large bubble mixing tank technology reduces the need for:

Chemical Mixing with a Pump 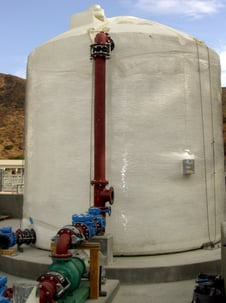 Mixing chemicals without a mixer involves using one or more strategically placed pumps to mix the chemicals inside the tank. It can be a better solution than mechanical mixing, if you’re concerned about avoiding the disadvantages of an agitator.

Pump mixing works like a swimming pool, which drains water from the bottom of the pool and pumps it back in near the top of the pool, just under the water line. In a chemical tank, the liquid in the storage tank is mixed using a pump, which is plumbed to the tank to create a combination of vertical and lateral flows. In-tank mixing draws the fluid out of the tank, usually at the bottom, and returns it to the tank via a nozzle on the dome.

This nozzle, called an in-tank eductor, uses principles of fluid dynamics to pressurize the fluid. The combined stream produces a high-velocity flow that creates agitation, which mixes the chemicals in the tank. In some cases, mixing can occur with a pump discharge fitting only. Many pump experts can assist you in proper sizing.

As in any chemical storage application, proper system setup comes down to the chemicals you’re using. The location and placement of the eductor and pump, their level, and their angles are all determined according to the particular chemical application. A chemical storage expert can help you choose the right locations and fittings for your mixing system.

We recommend contacting us before you begin designing the tank mixing system. We have engineers on staff that can help with selecting the proper mixer mount for your specific requirements.