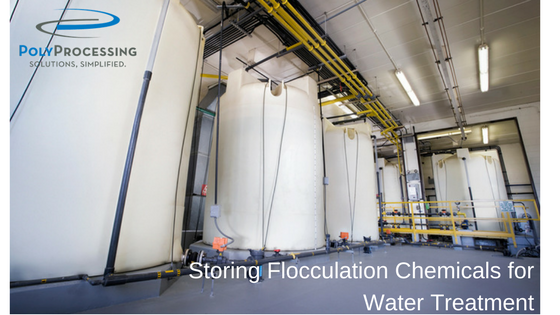 Coagulation is one of the preliminary steps in cleaning water and when chemicals are used, a few design practices regarding the storage tank can bring safety, longevity and operational efficiency. Understanding how coagulants work in water treatment, what to do about the sludge that accumulates, and how to minimize risk will help you configure an effective and efficient coagulation tank system.

There are several different applications for coagulants. Some of the most popular uses include:

Small floating particles in river water can make you sick. Floating particles are naturally found in the water source, whether it be a river, lake, or well which your local treatment plant must remove before further processing and sending to our homes. These floating particles, which are too light to settle by gravity, are called Colloids. They are made up of both non-organics (such as clay or silt) and organics (such as algae or bacteria). When ingested by humans, some of the organic bacterias can be fatal.

The more cloudy or muddy resting-water looks, the more floating particles exist. This measure of water clarity is known as turbidity. The more turbid the water, the higher the chance it carries disease, which can make people sick or even kill them. To prevent such disaster, we need to settle these particles out of suspension by bonding them to one another so that they become heavy enough to fall out of suspension by gravity. This process of bringing the particles together is called flocculation. After the floc forms, it can be separated from the water, leaving behind clear water. This is known as coagulation. Therefore, the chemicals that cause these particles to cling together and fall out of suspension can be called coagulants, or flocculants.

People have diligently worked to clarify water since the Egyptian times, when people would spread almonds around water channels so that the almond oil would separate solids from the water. There are two common coagulation chemical groups (both metal salts) that are used to clump solids together in the water stream today.

2) Those based on aluminum:

Other chemicals used as coagulants include hydrated lime and magnesium carbonate. It’s important to note, polymers are man-made organic compounds made up of a long chain of smaller molecules. Polymers can be either cationic (positively charged), anionic (negatively charged), or nonionic (neutrally charged.)

Why Flocculants and Coagulants Work

Almost all colloids have negatively charged surfaces. So, charged particles in the water (having positive ions) will be attracted to the colloids, exactly like opposite poles of a magnet. Similar to the way that the same poles of a magnet repel each other, the similarly charged layers of colloids repel each other thus staying small, repellant, and causing turbidity. The added chemicals neutralize the negative charge, allowing the solids to clump together. This makes removal easier since the particulates fall out of suspension with more mass.

Poly Processing Company manufactures chemical storage tanks for all types of coagulation chemicals and can design the right system for your unique application.