Mixing chemicals and other substances is a lot like mixing cake batter. A container is involved, as is a stand (or bracket) to support the mixing system. But, if you’ve ever made a cake, you know that you have to move the bowl around to mix all the ingredients. It doesn’t work to stick the beaters down in the bowl and keep them in one place. 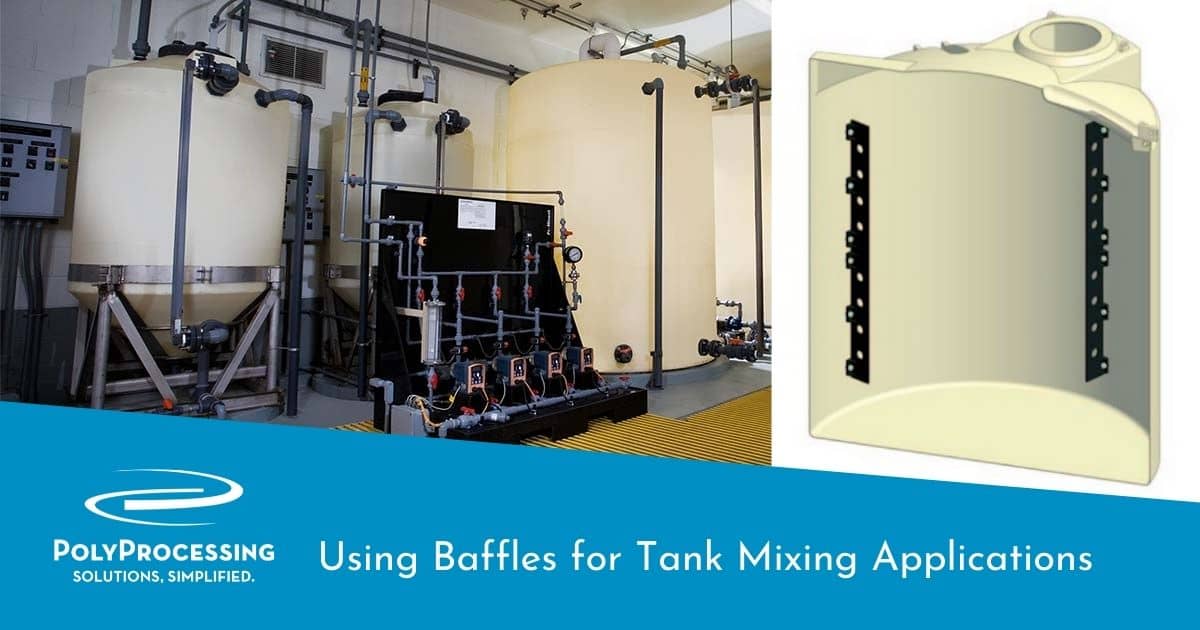 Obviously, in a chemical storage and mixing scenario, moving the tank around to get all the chemical that can’t be reached is not an option. That’s where baffles come in.

Baffles are long, flat plates that attach to the inside of the tank to prevent swirling and promote top to bottom fluid movement. They are most commonly used for blending and solid suspensions, because these applications often use vertical cylindrical tanks that tend to create swirling patterns, regardless of the type of impeller being used.

The loads generated by baffles can be much less than those generated by offset angle or vertical mounting techniques. For many tanks, offset mounting will work just fine, and the extra cost associated with compensating for unbalanced load is minimal. For some larger tanks, it becomes expensive to go with the heavier-duty mixer, and installing baffles may be more cost effective.

Three or four baffles are typically used in a tank, depending on its size, and they are mounted 4-6 inches off the inside of the wall.

How are Baffles Attached?

Baffles aren’t welded to the inside of the tank. Instead, they’re installed with polyethylene encapsulated bolts and closed with a gasket to prevent leaks. These are the same bolts that are used for internal/external pipe support. The gasket material is dictated by the type of chemical you’re storing.

Since the baffles are made from polyethylene and are bolted onto polyethylene, there are no concerns about chemical compatibility.

Different chemicals require different mixing systems. Some chemicals create sludge, and the sludge needs to be mixed to avoid buildup at the bottom of the tank. A baffle system is an ideal solution in this scenario, because it creates top to bottom fluid movement. Mixers can also be installed at an angle to create a different mixing pattern.

Some food, pharmaceutical, and wastewater applications will require a clean in place (CIP) application to prevent contamination.

When designing the tank mixing system, it’s critical to consider several factors to ensure that the proper bracketing is used. Engineers need to determine the downward load, bending load, weight of the mixer, torque load on the mixer, and the angles. Careful consideration and understanding of these elements will result in a safe, cost effective chemical storage solution.

However, when a mixer is not properly mounted and bracketed, improper mixing can result in additional costs of wasted materials and potential damage to the mixer and the tank.

We recommend contacting us before you begin the design of the tank mixing system so that we can help.