Secondary containment is an important safeguard that helps plant operators mitigate the costly risks of chemical spills. Many companies are realizing the business advantages of switching from open-top tanks and concrete basins to a double-wall containment system.

No, a tank-plus-concrete berm isn’t a double-wall system. Berms don’t keep rainwater and debris out of the containment space. If the chemical tanks top sidewall has a leak, it could spurt right over the containment wall. A concrete berm solution is a tank in a tub. We can provide that solution as well, but it doesn’t provide the safety and financial benefits of a true double-wall tank. 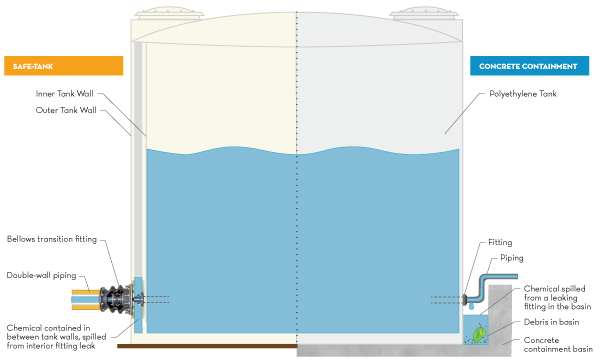 What Are the Benefits of Double-Wall Tanks?

Every square foot counts. The double-wall SAFE-Tank® has a remarkably smaller footprint than a tank with a berm around it. The double-wall system uses equalization between the two tanks to contain 110% of the volume of the primary tank.

A concrete containment basin is three to four times more expensive than the SAFE-Tank system. Costs quickly rise as you pour the concrete pad, coat the inside of the pad and maintain it over the years. Double-wall SAFE-Tanks only have a one-time cost of purchase.

Double-wall systems also reduce business losses. In the unlikely event of a breach of the primary tank, you can still use any chemical that is leaked because debris and rainwater can't enter the interstitial space.

Store Acids and Bases Together

If you’re using a concrete berm for containment, you need to isolate acids and bases from each other. If you have two leaks over time, the chemicals could come into contact with each other inside the berm and cause a reaction. With a SAFE-Tank double-wall system, you can store dissimilar chemicals in the same area. If a leak occurs, the double-wall system completely contains all of the chemical, so there is no danger of acids and bases coming into contact with each other.

Do We Need a Concrete Berm Around the Double-wall Tank?

Many companies feel like they need to build concrete berms even when they have a SAFE-Tank. Sometimes it’s simply out of habit. Other times, there’s a fear that they could overfill the chemical tank, spilling the material out of the manway. If you don’t set up the system correctly, you could have problems, but with the right setup, it’s not an issue. Use a high-level sensor on the SAFE-Tank to shut down the valve or alert you when the tank is getting full.

How Do I Drain the Primary Tank and Still Have Full Containment?

Double-wall containment is only as secure as its weakest link. The most likely spot for a problem isn’t the double wall itself, but the drain outlet fitting on the wall. Since the tank wall must be cut (and thus compromised) to install a fitting, that connection is more susceptible to pressure and vibration and becomes vulnerable to failure.

Poly Processing’s Bellows Transition Fitting solves this issue, so that you can drain the SAFE-Tank and still have full containment. The transition fitting fully contains both the fitting and piping from the inner tank, through the outer tank, to the outlet. If the fitting or any of the seals were to be overstressed and fail, the leak would be contained inside the bellows and flow back to the containment space between the inner and outer tank. Such a breach would also trigger the leak detection sensor. 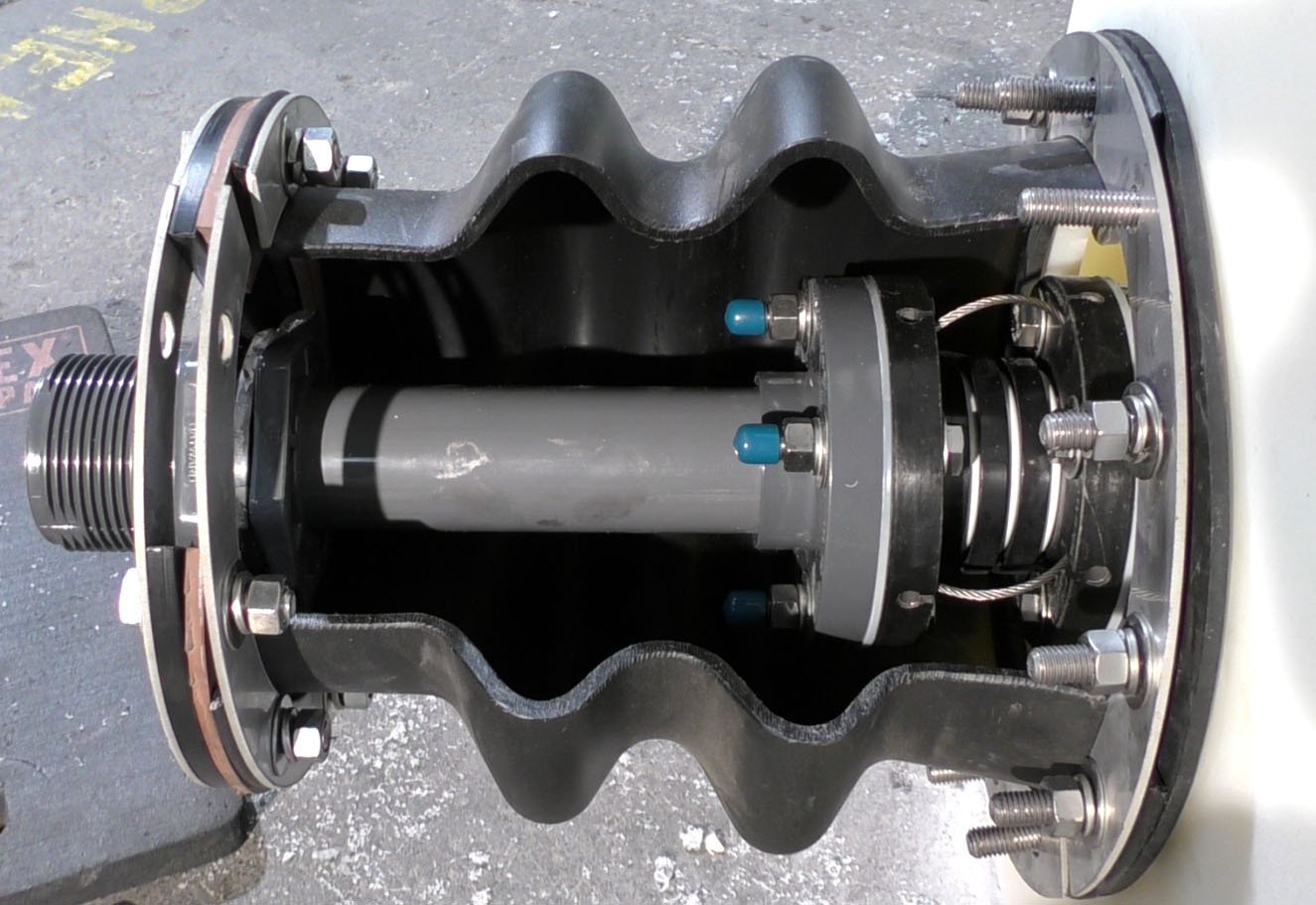 This fitting successfully contains any potential leak where chemical must be pumped between the tank walls. However, many nested tank systems lack this final wall—a fitting failure here would siphon the tank onto the ground.

Can I Have Double-Wall Piping?

Yes! Double-wall piping is a secondary contained piping system, where one pipe exists within another—similar to the double-wall tank system. The outer pipe is transparent, so that you can visually inspect the primary pipe or spot chemical leaks.

You can take things a step further by installing a leak detector in the pipe or pump box in case of a chemical leak in the pipe. These additional protections to your pipes could potentially save you thousands of dollars in overtime.

Get the most out of your double-wall containment system and learn more in our Secondary Containment eBook.