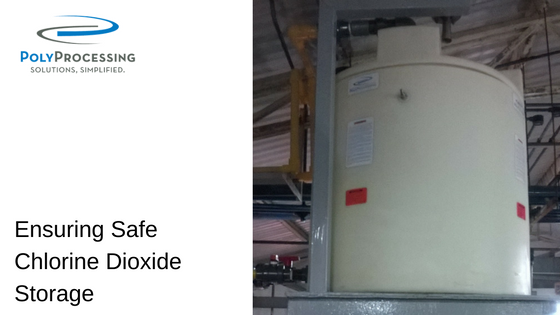 Chlorine dioxide is an NSF/ANSI approved chemical at 38% or less concentration for Poly Processing tank systems.

A neutral chlorine compound, chlorine dioxide is a strong disinfectant that differs in chemical structure and behavior compared to elementary chlorine. It is also highly soluble in water, approximately 10 times more soluble than chlorine.

Even in it’s liquid state, chlorine dioxide remains a dissolved gas in solutions, requiring us to be very careful when storing the chemical, no matter it’s concentration. 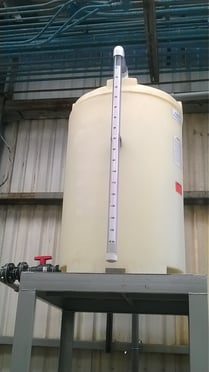 Because of it’s efficiency, chlorine dioxide has a number of uses. The largest market is for pulp bleaching, helping make the paper you use every day whiter. It is used in the electronics industry to clean circuit boards, in the oil industry to treat sulfides and to bleach textile and candles. Chlorine dioxide has the advantage that it produces less harmful byproducts than chlorine. Chlorine dioxide can be used as an oxidizer or disinfectant. It is a very strong oxidizer and it effectively kills pathogenic microorganisms such as fungi, bacteria and viruses. It also prevents and removes bio film. As a disinfectant and pesticide it is mainly used in liquid form. Chlorine dioxide can also be used against anthrax, because it is effective against spore-forming bacteria.

How to Store Chlorine Dioxide Safely

When considering a storage solution for your specific chlorine dioxide application, it’s important that your chemical storage tank system is stored in a cool, well-ventilated area (70°F or less). In order to protect your tank walls and your environment, your chemical storage system should include the next generation OR-1000 system. With four times the antioxidant power of a standard tank wall, this resin system adds an extra chemical barrier and even more protection.

If your specific application requires any heating of the chemical above 70°F, we would also recommend a fume tight manway cover to protect from harmful fumes. Because of this specific nature of this chemical, we limit our concentration levels to further protect the environment and employees.