OR-1000™: Next Generation System for Oxidizing and Corrosive Chemical Storage 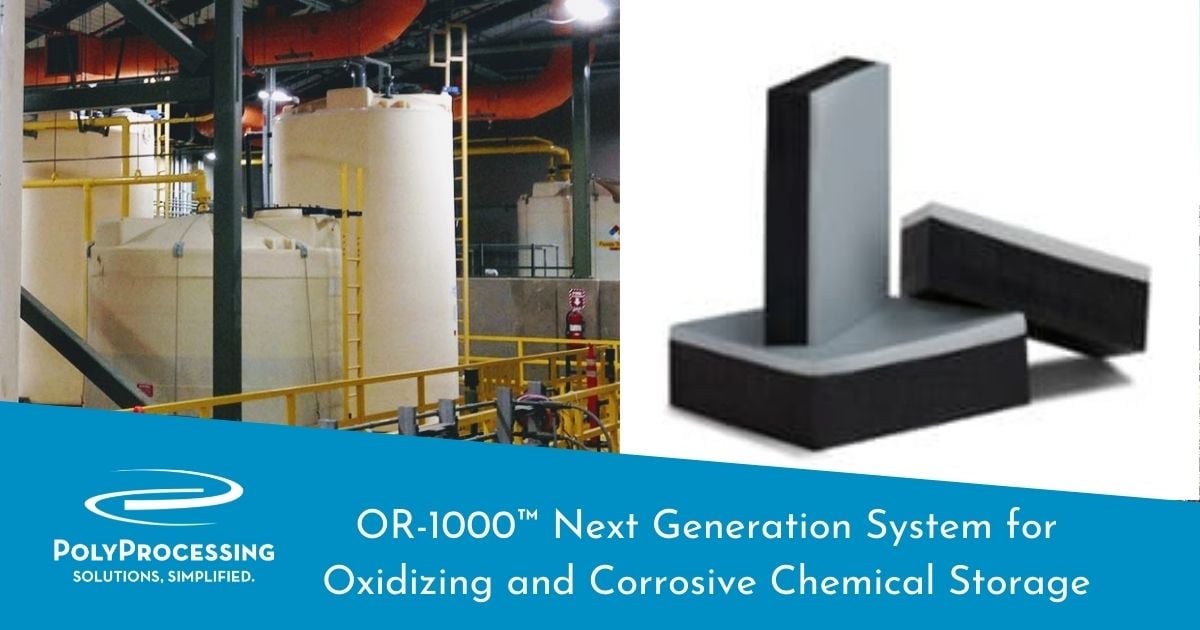 Poly Processing Company (PPC) has been a leader in rotationally molded crosslinked polyethylene (XLPE) storage tanks for 40+ years. PPC works with leading universities to develop engineered polymer systems that will perform above and beyond any standard “off the shelf” polyethylene in harsh, oxidizing environments.

One of the systems we’ve developed is the OR-1000™ system. This system is the result of an initiative aimed at defining and addressing the long-term failure mechanisms associated with polyethylene when storing strong oxidizers and other corrosive chemicals.

The OR-1000 system is an inner-surface engineered resin with four times the antioxidant power of a standard tank wall. Poly Processing’s exclusive OR-1000 system was specifically designed to address the aggressive oxidation effects of sodium hypochlorite, sulfuric acid, and hydrochloric acid. It does this by adding an additional resin system between the XLPE and the chemical.

The OR-1000 is designed to maximize the useful life of storage tanks in oxidizing environments. This system increases the life of a crosslinked polyethylene tank, giving you a better cost-effective solution.

OR-1000’s engineered resin system is made of polyethylene that’s specifically formulated to resist oxidation. Its outer surface is made of XLPE for superior strength. The two surfaces are molecularly bound together during the roto-molding process creating a truly seamless bond between the XLPE and OR-1000 system. 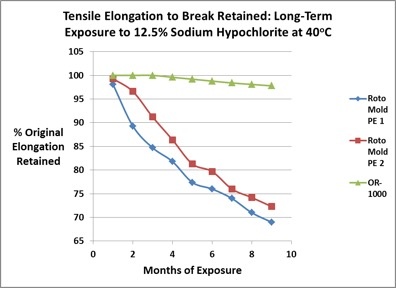 The OR-1000 system’s resistance to oxidative degradation is illustrated in the chart to the right. This chart compares the tensile elongation of the OR-1000 system and two different commercial rotational molding PEs when exposed to 12.5% sodium hypochlorite (industrial strength bleach) solution at 40 degC. Sodium hypochlorite is one of the strongest chemicals that oxidizes polyethylenes.

After nine months of exposure to sodium hypochlorite, the conventional PEs have lost an average of 30% of the original tensile elongation to break, while OR-1000 has lost only about 3%, indicating about 10X greater resistance to oxidative degradation for OR-1000. Loss of elongation in this manner indicates an increasingly more brittle tank or liner and thus greater susceptibility to cracking and leaking over time.

The data clearly demonstrates the superior long-term performance of the OR-1000 system for storing strong oxidizing chemicals such as sodium hypochlorite. 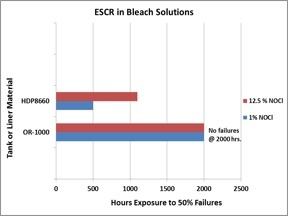 Polymers such as polyethylene are especially susceptible to another type of failure known as environmental stress cracking (ESC), which happens when polymer chains start breaking in stressed areas of a tank. Examples of stress include normal heating and cooling of storage tanks in outside environments or pressurized filling and emptying of transfer tanks used in chemical manufacturing.

The stress cracking process is accelerated by storing solutions of chemicals, particularly dilute solutions, in which the chemicals have increased mobility and can physically penetrate the polymer structure and increase the stress differences.

The chart to the right shows the difference of ESCR in tanks with and without OR-1000.

Real World Benefits of the New OR-1000 System 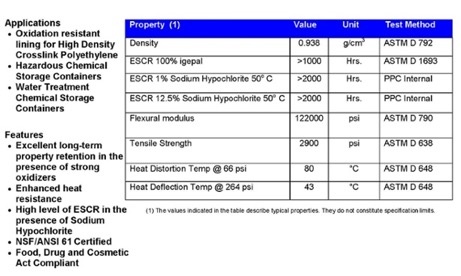 To learn more about the Next Generation OR-1000 system, contact us.