Our team wanted to test how polyetheylene tanks would hold up in the real world. So we subjected rotomolded, cross-linked and linear high-denisity poly tanks to high-impact and pressurization tests.

Here are a few highlights of what was uncovered:

Keep reading for the full article or download the pdf here.

Polyethylene is a diverse polymer material used in many products and applications. This diversity is due to the material’s ability to be produced with a wide range of properties and characteristics, such as impact strength (toughness), chemical resistance, design flexibility, and overall mechanical strength.

Such diversity provides engineers and designers greater flexibility in selecting the proper polyethylene resin grade for the intended application. This also requires them to be aware of the strengths and weaknesses, or limitations, of each of the commercially available polyethylene resin grades. Failure to truly understand the materials’ physical properties can result in premature failure of the designed product and, in a worst-case scenario, catastrophic failure.

There is a strong correlation between a material’s toughness and its resistance to rupture. In fact, the more resistant a polyethylene resin grade is to rupture, the tougher it is considered to be. Rupture is defined as failure due to tensile stresses that are orders of magnitude higher than the yield stress of the material. In thick polyethylene products such as pipes and tanks, the failure mode due to rupture is in the form of crack initiation and subsequent propagation through the thickness.

Factors such as density (crystallinity), temperature and the presence of residual stress or stress concentrators such as notches and defects all influence the rupture resistance of polyethylene. In general, linear polyethylene resin grades that are high in density are less resistant to rupture than those lower in density. However, high density linear polyethylene resin grades are “notch sensitive”. That is, they are unable to deform or yield upon impact, and thus cannot resist crack propagation once it is initiated.

Unfortunately, in the area of rotomolded storage tanks, the presence of notches is unavoidable. Whether they are at the surface of the rotomolded article (such as a surface scratch), or within the material’s thickness, notches can develop during de-molding, handling, transportation, loading, and unloading of the rotationally molded storage tanks. These notches can and will ultimately grow to form cracks that will propagate throughout the material’s cross section. In the case of linear polyethylene resin grades, the resulting stresses experienced during filling and discharging of the stored liquid, and the natural expansion and contraction of the polyethylene material, will accelerate this propagation and lead to the “un-zipping” (catastrophic failure) of the rotomolded tank. The problem of notch sensitivity in rotationally molded storage tanks can be eliminated by using crosslinked polyethylene resin. In this material, molecular chains that make up the polymer are chemically bonded together, or bridged, to form a continuous three-dimensional structure. This allows the impact energy to be dissipated throughout the infinite chain of molecules, or three-dimensional structure. In the case of linear polyethylene, however, the impact energy is always localized and thus the generated stresses are higher.

In addition to enhancing the overall mechanical properties of polyethylene, these “bridges” or “cross links” act as crack arrestors and do not allow the polyethylene material to unzip due to crack propagation.

Because un-zipping of the polymer chains can lead to catastrophic failure in linear polyethylene resins, Poly Processing Company conducted a comparative study on rupture resistance and notch sensitivity of both crosslinked and linear high density polyethylene. Rotomolded tanks, from both materials, were subjected to high impact and over-pressurization to study their rupture behaviour and the effect of notch sensitivity on crack propagation.

This study and all associated tests were witnessed and supervised by an outside engineer. Two sets of rotomolded polyethylene tanks having a storage capacity of 11,400 liters were used in this comparative study. Each set consisted of two tanks, one made from crosslinked polyethylene and the other from linear polyethylene. 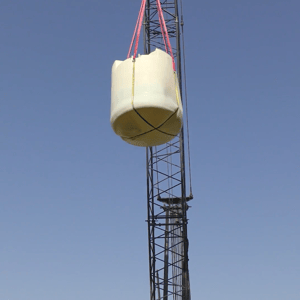 The first test in this comparative study was the drop test. Each tank in the first set was filled with 3,200 kg of water and lifted with a crane, one at a time, to a height of 5 m. This height is comparable to that used in the testing of polyethylene drums used for fuel storage. Once the rotomolded tank reached the desired height it was released and allowed to free-fall onto the concrete surface below.

The linear tank failed catastrophically. The associated crack propagation appeared to be consistent with the un-zipping characteristic found in linear polyethylene resin grades. The crosslinked polyethylene tank did not fail or develop any cracks.

The same crosslinked polyethylene tank was then refilled with 5,000 kg of water. That’s over 15 times its weight when empty. It was then dropped from the same height, again with no damage. The tank still containing 5,000 kg of water was dropped a third time, but from 15 m. There was no damage.

Each tank in the second set was completely filled with water and, using a 5.5 hp heavy duty water pump, was pressurized until failure or rupture. The manway opening was completely sealed and the pump was connected to the tank through a standard 50 mm diameter pipe fitting. This technique simulates the normal filling characteristics of a tanker truck loading a bulk storage tank in the field. The pressure inside the tank was measured using a standard dial gauge.

The linear polyethylene tank failed after pressure inside it reached 9 psi. The failure of the tank was the result of multiple fracture lines, or cracks. The smooth fractured surfaces indicate a brittle failure.

The crosslinked polyethylene tank failed after reaching internal pressure of 10 psi. But, unlike thelinear tank, only a 150 mm lesion was formed on the dome of the tank due to the pressurization. This clearly demonstrates the excellent resistance of crosslinked polyethylene to crack propagation or un-zipping. Further analysis of this lesion revealed that it developed at one of the top corners of the stiffening gussets found on the dome, which is a stress riser location. Also, this lesion exhibited a ductile failure mode due to the presence of elongated plastic strands.

Here is the complete video footage of the drop test and pressurization test:

Explore the magazine for yourself today. Click here to read the August 2018 issue of Environment Science & Engineering.