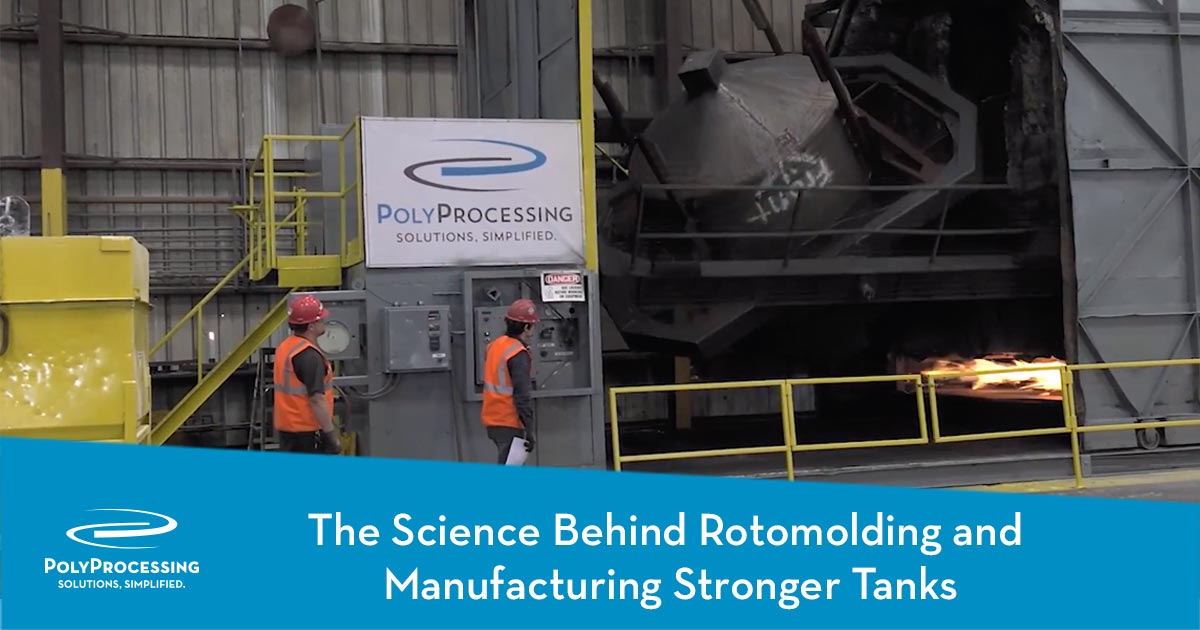 Rotational molding starts with cross-linked polyethylene resin in a powder form. Each tank size has its own specific mold. A certain amount of resin is added to the mold, depending on the wall thickness.

Three things that dictate the design wall thickness of the tank:

Once the resin is inside the mold, the chemical process begins

The Chemical Process of Rotomolding

The mold is bolted at the parting line and mounted in the oven, which is heated by natural gas burners. It is hydraulically rotated at 4-12 rpm. As the plastic melts, it builds up layer after thin layer of polyethylene. The plastic takes the shape of the mold, and once it has completely formed and cured, the mold is removed from the oven. The tank cools, and the mold is unbolted to reveal the final product. The whole process takes anywhere from 20 minutes to more than 6 hours, depending on the size of the tank and wall thickness.

Historically, rotational molding was a trial-and-error process when it came to knowing proper cook times. The manufacturing steps would be performed, and the tank would be subjected to an impact test. If the tank was properly cured, it would pass an impact test and be deemed an acceptable part.

Today, molds are equipped with wireless telemetry systems that monitor temperatures during the molding cycle. This gives us exact temperatures at which the plastic melts, when it cross-links, and when to introduce an antioxidant system, such as Poly Processing’s OR-1000®. This high-tech system also tells us when to stop rotating and heating the tank.

Without this monitoring system, it is still possible to manufacture a tank that will pass an Impact Test, but Poly Processing strives to produce a tank with optimum properties. Being able to gauge the processing parameters allows Poly Processing to take the guesswork out of rotomolding and to create a tank that can perform at the highest level for many years.

Do Rotomolded XLPE Tanks Stand up to Linear Polyethylene?

However, you can eliminate notch sensitivity by using cross-linked polyethylene (XLPE) tanks, because molecular “bridges” or crosslinks prevent the material from unzipping.

But it’s one thing to say XLPE tanks perform better—it’s another thing to really put it to the test. To find out if our crosslinked polyethylene tanks would hold up under real-world pressures, we subjected cross-linked and linear high-density polyethylene tanks to strenuous conditions.

Rotomolded tanks from both materials were subjected to high-impact and over-pressurization tests. Even we were surprised by the results. Watch the video below to see how our XLPE tanks compared to linear polyethylene. We think you’ll be impressed—especially with the final test.

Download our comparative study to see for yourself how well cross-linked polyethylene tanks performed under extreme conditions. This study reveals: