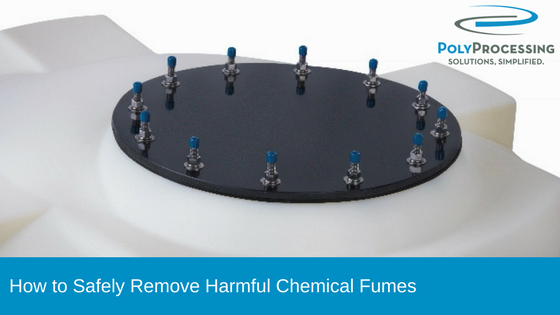 Regardless of the chemical that you are storing, nearly every chemical releases fumes. Yet, some chemicals, like hydrochloric acid, acetic acid and hydrofluoric acid, produce fumes that can’t be released into the atmosphere. These fumes are very aggressive. They can harm your chemical storage tank, your equipment, and your employees.

Fuming chemicals require special handling. You can’t allow the vapors to escape into the air, but you can’t seal the chemical tank because the pressure will continually build up inside the tank. Fortunately, Poly Processing has a solution that protects your tanks and your assets from harmful chemical fumes.

These chemicals can be toxic to your employees as well as the tank and equipment around the tank if not properly handled. Fighting chemical fumes takes special engineering and tank design. We've witnessed facilities storing hydrochloric acid that did not reinstall manways tightly during maintenance. This error caused corrosion around the manways, sensors and metal equipment around the tank because the fumes were attacking them.

Remember, these fumes are extremely aggressive and can cause costly damage to your chemical storage system. It is critical that you involve Poly Processing upfront, during the engineering, design and purchasing process, to make sure that your tanks and your facility are properly protected from the beginning. Here are two things you need to consider in your next project. 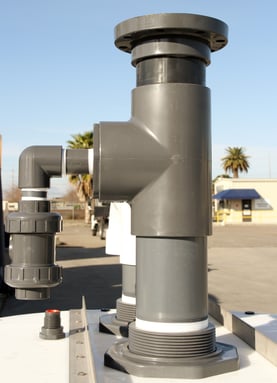 Your best solution against chemical fumes is a chemical scrubber. This process begins by plumbing the tank’s vent into a wet scrubber. The fumes then go through the vent piping to a secondary, smaller tank that contains a PVC plenum with small slits in it. The fumes travel through the pipe and through the plenum, which then bubble up through a scrubbing liquid. The scrubbing liquid absorbs the fumes and the odor, then vents out of the top of the scrubber as clean air.

Poly Processing manufactures fume-tight manways and lids for fuming applications. This fume tight system is critical when dealing with fuming chemicals. The lid is built with a polyethylene plate bolted to the tank with 16-bolts and gaskets to ensure a safe seal. This ensures that none of the fumes escape from any portion of the tank, except for the scrubbing vent.

Never try to retrofit a scrubber onto a tank you’re already using. Many end users try to save costs and install a chemical scrubber themselves. But they don’t buy the proper scrubber for their tank, and end up creating more problems. 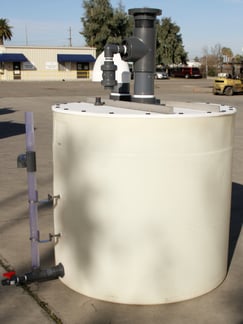 For example, they often inadvertently reduce the venting capacity to the scrubber, which causes back pressure to the tank and premature tank failure. Some companies will route the piping from two or three tanks into one scrubber. This overloads the scrubber system to a point where it backs up the pressure into the tanks.

When you’re dealing with harmful chemicals such as hydrochloric acid or acetic acid, it’s important that you communicate the following information to your Poly Processing customer support representative:

If you’re storing fuming chemicals like hydrochloric acid, make it a top priority to use a scrubber.

Talk with one of our experts at the very beginning of your project, and we’ll make sure you’re outfitted with a scrubber that’s designed specifically for your tank.