The Security Benefits of A Bellows Transition Fitting

We have all heard the adage, “if a job is worth doing, it’s worth doing right”. Poly Processing believes this to be true 110% of the time when it comes to containment. Every single piece of a tank system needs to be completely secure to protect your workspace, your employees, the environment and the chemical being stored. Thus, when you install a tank-within-tank system like the SAFE-Tank with a sidewall fitting, it is critical to also install a bellows transition fitting.

The ‘Why’ Behind The Bellows Transition Fitting

Have you ever seen a dog pen with only three outside walls? Neither have we. Such a dog pen would be useless, right?

If it’s worth doing, you do it right, or you may as well not even bother with just “most” of a containment wall. Containment is only as secure as its weakest link.  If you’re using a double-walled tank system with a sidewall fitting and you don’t have a bellows transition fitting installed, it’s the equivalent of the aforementioned three-walled dog pen.

In a storage situation that calls for emergency containment, a double-walled, or “tank-within-a-tank” is a great solution that offers 110% containment (or more depending on size) and meets most state and local standards for containment. The most likely potential for a problem, however, is not the tank wall itself, but the drain or pump outlet (i.e., the fitting) on the lower section of the tank wall.  Since the tank wall must be cut (thus compromised) in order to install a fitting, that connection is more susceptible to pressure, vibration, operating or maintenance errors, and becomes a more vulnerable potential issue than the rotomolded cross-linked wall itself.

The Fourth Wall: The Transition Fitting

The transition fitting fully contains both the fitting and piping from the inner tank, through the outer tank, to the outlet. If the fitting or any of the seals were to be overstressed and fail, the leak would be contained inside the bellows and flow back to the containment space between the inner and outer tank. Such a breach would also trigger the leak detection sensor. This fourth wall successfully contains any potential leak where chemical must be pumped between the tank walls. However, many nested tank systems lack this final wall and a fitting failure here would siphon the tank onto the ground. The dog would be out!

What Could Be Even Worse Than No Fourth Wall?

How about a seal “designed to fail”? Some nested tank containment systems place a rubber doughnut fitting between the inner and outer tank at the outlet and then bolt the walls to each other in order to secure this sealing donut. However, this creates a lock or hinge between the two walls, which in fact negates the installation instruction of allowing the inner tank to move freely. It not only fails to contain, it additionally creates a dangerous hinge point on a unit “required” to flex as it fills and empties.

How the Transition Fitting Avoids The Hinge Point

The bellows transition fitting has a flexible expansion joint that is inline with the outlet pipe that runs through both tanks. The inner tank is connected to this transition pipe with a Bolted One-Piece Sure Seal (BOSS) fitting; the best fitting on the market for the lower sidewall of a tank. 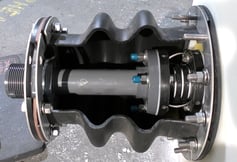 The Containment Bellows (the small containment wall or shell around the outlet pipe) attaches tot he outer tank. The Inner tank can flex, unrestricted, and the fitting is additionally contained with the Bellows as explained above.

Installing the bellows transition fitting is easy, and it is worth some additional cost for true containment. In other words, if the project is all about saving a few extra dollars for a 3-wall dog pen, perhaps one should eliminate ALL the other containment costs and just use a Dog Stop Sign.

Extra Protection For Your Pipes 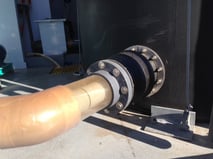 If you want even greater protection, tank pipes can be contained with a custom transition fitting to contain leaks. This containment option is clear so that you're able to see the condition of the pipe or spot chemical leaks.

You can take things a step further by installing a leak detector in the pipe or pump box in case a chemical leak comes out of the pipe. These additional protections to your pipes could potentially save you thousands of dollars overtime.

Talk to a chemical storage expert today to learn how to best design your protected tank system.